A Woman’s Flower: An Examination of “Jane the Virgin” 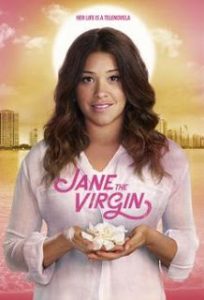 The moment the CW’s show, “Jane the Virgin” hit televisions, it was praised for the show’s humor, magic realism storytelling, and its diversity and representation of a family of Hispanic women. At the center of this critically acclaimed show is Jane, a pregnant virgin who seems to do anything to protect her virginity, no matter how many handsome admirers or unexpected pregnancies life throws at her.

In fact, throughout the show, Jane keeps possession of a flower, which comes to represent her virginity. Symbolic interactionism can explain the symbolic meaning of the flower, as well as how the symbol affected Jane and the relationships between Jane, her mother, and her grandmother.  Using this sociological paradigm helps to unpack the loaded meaning behind the flower, which represents much more to Jane than just virginity; it also represents her religion, her culture, and her family’s values. Symbolic interactionism is a sociological approach that focuses on relationships between small groups of people, with a focus on language and symbols. The most prevalent symbol in Jane the virgin is a white flower.

When Jane was ten years old, her Abuela had her hold a perfect, pure, white flower in her hand, and crush it. After, Jane was told to make the flower look new again, and when she was not able to make the crumpled flower pedals look untouched, her Abuela told her, “You can never go back. And that’s what happens when you lose your virginity. You can never go back. Never forget that, Jane.” The story fast forwards 13 years, and Jane is now 23 years old, about to be engaged, and still a virgin. In fact, she has the exact flower she crumpled hanging on her wall, as a constant reminder of her Abuela’s words. Several times throughout the pilot, we can see Jane practice self-restraint, stopping herself and her fiance before they cross the line, where she can, as her grandmother, Alba, put it, “Never go back.” The fact that Jane is practicing abstinence, and hangs the flower above her bed, signifies its importance.

As the show progresses throughout the season, the meaning of the flower grows to represent more than just virginity, most importantly, it symbolizes the stigma that is associated with her mother, who was a teenage mom, which caused tension between Jane’s mom and Alba. First, let’s examine the language Abuela used to teach Jane about virginity. She described the flower as “perfect” and “pure,” associating virginity with these traits. After the flower was crumbled Jane is told the flower can never return to that once beautiful and perfect state. This creates a clear connection between a woman’s virginity, and her perceived value and worth. Jane is told that once she gives up her virginity, she can never be pure or perfect. Putting this much value on virginity, and by telling her it is a one time use, Jane then spends the rest of her adult life trying to protect her virginity.

As the show progresses, the meaning behind the flower and the importance placed on virginity is explained. Jane’s mom, Xiomara, got pregnant with Jane when she was a teenager, forcing her to drop out of school, and raise Jane by herself. This caused a huge tear in the relationship between Xiomara and Alba, and Alba is a very religious woman, and in her religion, teenage pregnancy and premarital sex is frowned upon. So, when Jane came along, Abuela wanted to make sure Jane would not make the same mistakes as Xiomara. This is when Abuela planted the analogy of the flower in Jane’s head. This opens up the symbol of the flower to represent not only virginity but the stigma attached to Xiomara and teenage motherhood. This is evidenced by Jane, when she is considering losing her virginity to her fiancé (not husband). At this point in the show, she is still a virgin, but after being accidentally artificially inseminated by her gynecologist, she becomes pregnant. She opens up to her fiancé and says, “The reason I stayed a virgin is because I didn’t want to become like my mom: an unmarried, pregnant woman. But here I am, an unmarried, pregnant woman.” Here, Jane opens up a whole new meaning behind the flower: by protecting her flower, Jane was protecting herself from the stigma associated with sex, specifically with teen mothers. Throughout the show, more instances of how Xiomara was shamed for her teen pregnancy and sexual promisciousy comes to the forefront. For example, when a mean girl in high school explains to Jane why she spread a rumor around school saying that Xiomara slept with one of Jane’s teachers: “Everyone has a weakness. Yours is your mom.” This is someone weaponizing Xiomara’s sexuality against Jane, then describing it as a weakness. This definitely had a huge impact on how Jane views sex and virginity. Combine nasty experiences from strangers, with how the relationship between Xiomara and Abuela fell apart after Xiomara’s pregnancy, and it is no wonder why Jane felt the need to stay a virgin: to protect herself from the same fate and shame as her mother. 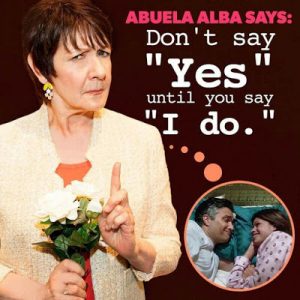 Lastly, as the show explores religion, the flower comes to represent Jane’s religious and cultural values. When Abuela hears that Jane wants to lose her virginity, she takes Jane to church. At church, Jane starts to imagine that the priest and a portrait of the Virgin Mary are speaking to her, telling her to hold onto her virginity. This shows how Jane’s religion, Catholicism, reinforces the message Alba taught Jane about her flower. Now, Jane has pressure from God to remain a virgin. In the last season of the show, it is revealed that Alba fled from Venezuela to America after her small town shamed her for participating in premarital sex. Now, the importance of virginity to this family strengthens, as Alba literally fled her home country because of the stigma that came with losing her virginity.

The flower is something that is referenced in every episode and is displayed in every advertisement for the show. After breaking down all the different meanings behind the flower, a symbolic interactionist would use these experiences, and how virginity has shaped the lives of all three women in the family, to explain the importance behind the symbol and how it affected Jane. While the flower represents virginity, virginity in and of itself carries a lot of weight and baggage connected to the characters, so the flower comes to represent virginity and the stigma attached to women losing their virginity. Seeing how the lives of Xiomara and Abuela have been deeply affected by sexual stigma, it is no wonder Jane put the flower above her head, and lived by that message, for most of her adult life. The flower is not just virginity or sexual stigma, it is the message that to protect herself from what Xiomara and Alba went through, she must protect her flower.

This is where symbolic interactionism can explain that the flower shaped who Jane was as a person. She was, from a very young age, always responsible, serious, rule-abiding; the perfect daughter. She was a straight-A student, worked while in college, and always on her A-game. After examining the meaning behind the flower, and the fact that she got these ideas about sex placed in her head from a young age, it shows how this “perfect” behavior was simply a cultural script, a character she played in order to be welcomed into society. If she was told to associate her flower with purity and perfection, and she was taught that losing it would mean facing the stigma her mom faced, she started practicing a cultural script that was the opposite of her mom, to avoid the shame her mom faced as a teenage mom and a promiscuous woman. The flower, and all that it represents, shaped who Jane is.

Symbolic interactionism is the best theory to apply because it focuses on the meaning behind symbols, and how that shapes one’s social world (in Jane’s case, it was the practicing of a cultural script). Feminist theory, a branch of conflict theory, can explain the sexual stigma against women. Specifically how virginity and the shame associated with losing it premaritally is a way to police and control how women use their bodies. Controlling how women behave with their bodies is merely a way to enforce the patriarchy and male-dominated society. A structural functionalist would argue that the flower and the shame associated with it has a necessary function: to scare Jane and keep her on the right path: away from trouble and on track to becoming a huge success, unlike her mother, who had to drop her life to raise a baby. However, neither of these theories would explain the value and meaning of the flower. Why else would Jane hang it over her bed? Why else would it be in every single promo for the show? The flower has value and meaning that significantly shape the three lead characters. Only symbolic interactionism could fully unpack this.

Using symbolic interactionism, we can, as an audience, better understand the characters in “Jane the Virgin ” by examining the most prominent symbol of the show: a flower. To make this analysis stronger, one must look at other factors: flowers and their tie to femininity, slut-shaming in Catholicism, and Catholicism’s importance to Hispanic cultures. Examining these factors would result in an even stronger look at the symbolic meaning behind the flower, and the importance of virginity to the show. The flower is a symbol that shows up time and time again in the show and holds significant weight to the show’s themes, characters, and plot. To fully understand the message being communicated throughout the show, one must fully understand the most iconic aspect of the show: the white flower. “Jane the Virgin” is a critically acclaimed show that tackled many issues from being undocumented to facing educational barriers, but after examining the flower, it is clear that the show’s main theme is to tackle and discuss sexual stigma in all forms. This show covered many women’s issues from abortion to slut-shaming, breast cancer, co-parenting, and everything in between. None of this is possible without the central symbol of the flower and all that it represents.