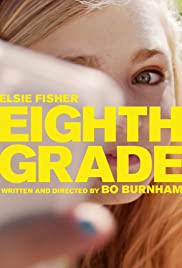 My all-time favorite genre of just about everything is coming of age. Movies, books, poetry, all about growing up and maturing into better people, really appeals to me. So, when I heard about the coming of age film Eighth Grade, written and directed by Bo Burnham, an internet comedian who I have watched since he was making videos in his bedroom, I was very excited for many reasons. First, the story centers around a young girl who is in (you guessed it) the eighth grade. As someone who didn’t have a very positive middle school experience, I was interested to see which aspects of the young woman’s journey the story would follow. Second, I wanted to support Bo Burnham, who holds a special place in my heart for multiple reasons. He is a woke, talented comedian who graduated from youtube to professional films and he is probably my very first internet crush. So, all in all, I was very excited for this movie, and although I missed it while it was in theaters, this weekend I discovered it was on Amazon Prime Video, so I made some popcorn and streamed the movie.

The main girl, Kayla, a thirteen-year-old girl who makes youtube videos giving life advice, navigates her way through her last week of middle school as she encounters pool parties, boys, and insecurities. The last one seems to be the most dominant obstacle. Throughout the film, we see Kayla’s battle to accept herself. The first scene of the movie is Kayla waking up, doing her hair and makeup, before crawling back into bed, taking a selfie with a Snapchat filter, and posting it with the caption, “Just woke up.” Other signs of her insecurities are her general awkwardness around her classmates and her desperate attempts for her classmates’ approval. In the film, she lies, acts strangely, and goes out of her way to be friendly to her peers. A notable moment was when she overheard that her crush broke up with his girlfriend because she wouldn’t send him naked pictures. During a lockdown drill at school, as an attempt to get some attention from her crush, Kayla crawls to him and mentions that she takes nudes to send to her future boyfriend(complerely untrue). Another moment is when she thanks a girl for inviting her to a pool party (despite that the invite came from the girl’s mom), and the girl looks at her phone the whole time, completely ignoring Kayla. Regardless, Kayla still desperately makes conversation.

Throughout the film, you can see Kayla’s desperate attempts to fit in. While this movie touches on several important issues (cyberbullying, fake personas online, school shootings, older boys taking advantage of younger girls, etc.), it is not the primary focus of the film, and gets mentioned in passing, or is seen as a consequence to Kayla’s insecurities, namely her bad experiences with boys. Toward the end of the film, Kayla learns to accept herself, stands up to her classmates, makes a real friend who accepts her, and starts acting more genuine.

I was a little underwhelmed with the plot and general storylines. I felt there was a lot being covered and not enough focus is put on any one issue. However, this movie really captured the feeling of insecurity and the longing to be accepted. I was not very popular or well liked in middle school. Watching the movie, all of it felt so real. I understood perfectly how Kalya felt, just trying to be liked and to make friends. Also, the actress playing Kayla, Elsie Fisher, did a really good job of playing an embarrassing teenage girl. From her misplaced laughter to her frequent use of the word, “Gucci”, she had me cringing throughout the whole movie. Which, I think, is what a movie is supposed to do; stir and create emotions within the audience. This movie did just that. I really have to give this movie credit because it is refreshingly authentic.

It might have been an okay movie, but Eighth Grade was an experience. It will take you inside the life of an insecure little girl trying to grow up and fit in. Eighth Grade will give you a glimpse into the life of just about every teenage girl.