Freddie Mercury: The Greatest Performer of All Time 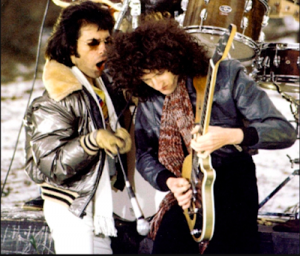 Music is essential in my house. Whenever we need to clean the house or drive anywhere, we put on music and sing our hearts out. Recently, my parents started producing live concerts, and I have had the pleasure of attending some of these concerts. In my house, there is round-the-clock talk about tech riders and sound checks. It is no wonder why music is always on my mind.

When I was very young, my dad and I would listen to music together. My dad would show me all the greats: The Beatles, Micheal Jackson, ABBA, and countless others as he played me a playlist with thousands of songs. I do not remember much of these music lessons with my Dad, but, there is one moment that I remember vividly.

I was around five years old when my dad asked me to come to his office. I sat on his lap, and he played me a music video of four men in a park. In the melted snow, these men started stomping twice and clapping once. They repeated this rhythm throughout the entire song. Then a skinny man with long hair and funny sunglasses started singing about a young boy playing in the street. I was mesmerized. Although the simple rhythm, and uncomplicated lyrics, this song blew my mind. I listened to it all day and all night for two weeks straight. Everywhere I went, I would be muttering to myself, “We will, we will rock you.”

That music video was for Queen’s “We Will Rock You” and that man with the funny sunglasses was Freddie Mercury. Watching this music video is one of my earliest memories, and is cherished because it is one of the first times I became emotionally invested in music. After falling in love with “We Will Rock You” my dad showed me all of Queen’s best works. My love for Queen helped grow my love for all music.

For weeks, my family and I have anticipated the release of “Bohemian Rhapsody” the biopic film about the English rock band, Queen. We saw it on opening night. It was incredibly emotional, and my favorite movie that I saw in 2018. When we got back home, my family blasted Queen music and watched videos of their live performances for hours, no exaggeration. Between watching Remi Malik’s very accurate performance, and watching old videos of the actual Queen, one thing became very obvious: Freddie Mercury is the greatest performer of all time.

Around the world, everyone knows that Queen is the second best band to have ever existed. Only The Beatles can top Queen. However, I do not hear many people or publications recognize Freddie as the best performer there ever was (and likely, ever will be). He is known as the best singer in rock and roll (rightfully so), but that is where much of the praise stops. Even Rolling Stone magazine lists Freddie as being only the seventh best male dancer in Rock history. What I feel many people, publications, and media outlets fail to recognize in Freddie is his stage presence. From the moment he stepped on stage, to the moment he stepped off, Freddie had the audience in the palm of his hands. When he sang, everyone in the venue sang with him. When he danced, everyone followed his moves. He had the crowd do vocal exercises with him. Freddie knew how to command an audience. 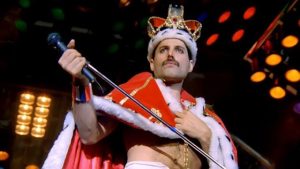 In its time, Queen was not extremely popular. Despite having equal musical talent to The Beatles, Queen did not reach that level of success, popularity, or critical acclaim. This is most likely because of who Freddie was. He was open about his relationships with men. He was bold with his outfit choices, often wearing feminine clothing. He was very seductive and sexual in his performances. Queen’s tenth album, Hot Space, which mimicked the sound of dance music found in gay clubs at the time, flopped. The media pestered Freddie to come out of the closet. Freddie kept his AIDS diagnosis a secret until the very end, and even after he died, he was criticized for contracting the virus. The public knew that Freddie was not straight, and they scrutinized that side of him. That side of Freddie made the public uncomfortable. In the 1970s, people were not ready for a queer rockstar.

“Bohemian Rhapsody” has introduced a new generation to Queen, and to Freddie Mercury. A generation with a more open mind. Through this movie, Queen, and Freddie hopefully can receive recognition for their talents without prejudice against Freddie’s sexuality and flamboyancy. Watching Freddie perform is an experience that is almost indescribable. He makes you feel that he is singing to only you. He gives you the confidence to sing and dance along. He was innovative in the way he moved on stage and interacted with the audience. I hope he receives recognition as the greatest performer of all time.