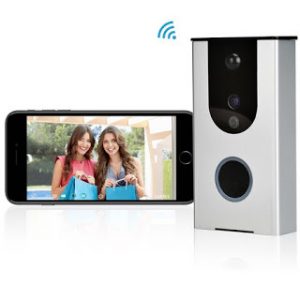 This week is the last week of my four-week free trial to the New York Times, so I have been taking advantage of it. My eyes have gone dry reading as many articles as I could before my subscription expires. Most of what I read was on current events, the White House, and the Muller Investigation. However, one piece really stood out because it raised an issue I have never spent too much thinking about: privacy.

Ring Doorbell lets you see and talk with anyone at your door.
Once part of the article really made me think about privacy: “Now, even your neighbor’s doorbell is watching you…” This is referring to Ring, the doorbells with a security camera built-in so you can see who is knocking at your door. These doorbells have been praised for protecting people and catching robbers in the act, but I have not heard the issue of privacy been brought up when discussing this product. This statement is technically true, as Ring doorbells record and monitor 24 hours a day to ensure the user’s protection. But this statement made me think about what privacy will mean in an increasingly technological world.

Even in the simplest sense of the word, privacy can mean keeping information and keeping your life a secret. With the increased use of social media, even this idea of privacy is being violated regularly. People can screenshot conversations and post them online, share videos and pictures of you without asking, and even tag locations in posts. Social media and the creation of the internet has brought up privacy concerns, particularly regarding women.

As technology advances, people will find a way to use technology for evil. Harassment, hacked bank accounts, stolen identities, leaked personal documents: the possibilities are endless for how technology could be used to destroy people’s lives and invade their privacy. Seeing how we currently have police forces that are not equipped to deal with these concerns and a Congress that isn’t drafting legislation to protect people from these issues, the question isn’t if we are losing our privacy, but what we will do to protect it.