The Power of Cinema: “BlacKkKlansman” 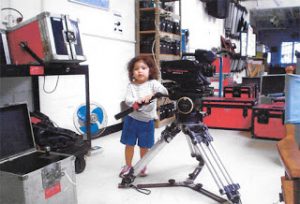 Although everyone consumes media, it can seem like teenagers do it the most. Maybe it is because teenagers do not yet have adult responsibilities, allowing them more time to watch hours of television and movies, or maybe because these forms of entertainment are exciting and provide some kind of an escape for teenagers who feel that their lives are mundane. Whatever the reason, it is clear that people, but especially teenagers, are heavily impacted by movies.

People who work and become successful in Hollywood were often film junkies when they were younger. Steven Spielberg, one of the most popular directors and producers in film history, credits the 1962 film “Lawrence of Arabia” as his biggest inspiration. It left him curious about the filmmaking process. He claims that whenever he starts a new project, he rewatches “Lawrence of Arabia” to get himself into the right mindset for directing. Not so shockingly, Spielberg was in high school when he saw this film.

Young people are impressionable and on a quest to find themselves. When something really speaks to an individual, it can have lasting effects – like Steven Spielberg and a movie he saw when he was a teenager. Most people have their own “Lawrence of Arabia”. Maybe a film impacted your style, way of speaking, hobbies, or changed you as a person, influencing morals, beliefs, or inspiring an epiphany. I am someone who believes in the power of the cinema. Films can spread messages, inspire movements, and touch people on a very personal level. Movie making is truly an art and I think it is the most powerful form of storytelling.

I love movies. In fact, marathoning movies is my hobby. Combine my love for films, with the fact that both my parents worked in Hollywood, and it should come as no surprise that making movies has crossed my mind several times. However, I don’t have a “Lawrence of Arabia”. I have not found anything that made a significant difference in me. I have movies that I thoroughly enjoy, but those films have come and gone in phases. I have never had a movie that has been my favorite for more than 6 months. 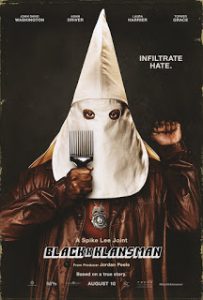 This weekend, my family and I went to the theater and saw “BlacKkKlansman”. This movie is about the true story of Ron Stallworth, a black detective who, in the 1970’s, led an investigation into and joins the Ku Klux Klan. The trailers made the movie seem wacky, and the whole premise of the movie is satirically ironic, but this movie was much more serious than I anticipated. The movie really puts a focus on the Civil Rights Movement and the racism black people faced, drawing connections to the Black Lives Matter movement and the racism black people in America still face. While the movie’s focus was on the story of Ron Stallworth, there is a very clear underlying message: race relations in America have not changed. There were several references to current events, showing how Donald Trump’s ‘Make America Great Again’ mentality aligns with the mentality and beliefs of the KKK. Most chillingly, the final scene of the movie takes place after the story ends, with clips of the riots in Charlottesville 2017, where white power groups marched the streets holding tiki torches. The riots escalated when the rioters clashed with protestors supporting Black Lives Matter. The filmmakers wanted to make a clear connection between the events in Charlottesville and the actions of the KKK. The very last scene is a standard cut to an upside down American flag, in color, slowly fading to black and white. These last seven seconds of silence was the most powerful of the whole film because, to me, it symbolized the death of our America.

I take pride that I am not affected by movies emotionally. I have cried in 3 movies: “Coco”, “The Little Princess”, and “Hardball”. I think a movie is good if it can make me cry. Well, “BlacKkKlansman” made me cry three times during the movie, and twice afterward. This movie touched something inside me that has not been touched before. I keep up with current events, and I have my progressively liberal opinions on social justice issues. Before watching the movie, I knew how toxic Donald Trump was for America. I knew how atrocious the events in Charlottesville were. I knew the how the race dynamics in America were. I knew the ideology of the KKK. However, watching this film, it was like learning everything all over again. This movie did a really good job of teaching the audience and leaving them with not just a message, but a feeling. “BlacKkKlansman” communicated the struggle that Black Americans have to face. While watching this movie, and just thinking about it afterward, I feel an aching in my heart and numbness in my hands.

There are so many things I admire about this movie, both from a technical and storytelling point of view, and I do not think my words can do this movie justice. “BlacKkKlansman” is a modern masterpiece and Oscar worthy. It is the kind of movie that leaves you speechless yet leaves your mind spinning, questioning, and connecting. Even a few days after watching it, this movie is the only thing on my mind. It might have taken 15 years of avid movie watching, but I think I finally found my very own “Lawrence of Arabia”; a movie that can inspire me, influence me, and change me for the better.